What we are trying to do here is develop a British style of Bobber. Whilst it is generally agreed that the term Bobber originated in the western U.S. to describe the cut down and lightened bikes being used immediately after WW II, the name has now become somewhat generic.
The concept of stripping a bike of anything not necessary in making it go faster dates back to the second time two blokes sat in a pub arguing about who's bike was the fastest. The second time because after the first time the bloke who lost probably started taking bits off his bike to get that edge. Since those very early days it is difficult to think of any form of motorcycle competition where extra weight is deemed an advantage. 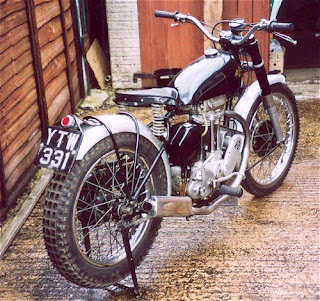 The trials bike shown here epitomises the stripped down style of, what we feel, are the roots of a Britsh Bobber. Rigid frame, 18" rear with 21" front wheels, alloy components everywhere and no extraneous baggage. It also utilises a big single cylinder engine which adds to it's purposeful simplicity. 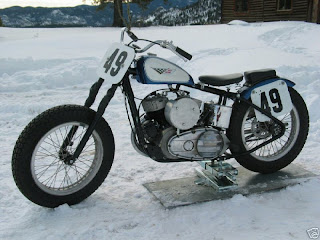 The second picture shows what was happening in the U.S. at around the same time, Flat Tracking. Again a bike that has been stripped to the bone, with the sole intention of making it faster than the other guy's.

So what we are looking to do, is strike a balance somewhere around this type of syling, utilising period British parts, to create a singularly British style.
Brought to you by ... Quaffmeister at 10:09 1 comment: Links to this post

Well here we go, this blog is basically centered around the building of British motorcycles. While the majority will be cut, shut and altered to suit personal tastes there may be the odd restoration slipped in here and there. 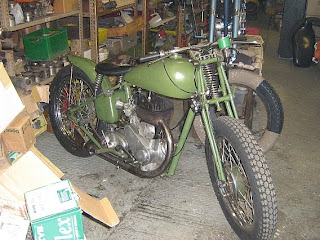 This M20 was photographed at a friend's workshop over Christmas. It epitomises what we do here, built up in a Bobber style, it carries nothing that does not make it stop or go.
Brought to you by ... Quaffmeister at 09:28 1 comment: Links to this post