Moving to the front 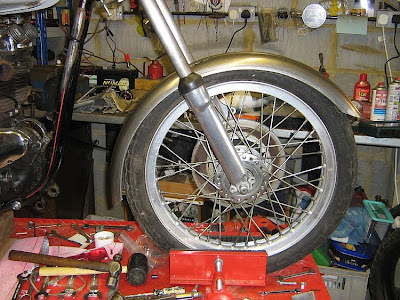 This is the front guard as delivered, it is the matcing one to the rear and is more or less a scale model of the back one, so the little flip up matches. The radius looks off, but it is made to run with clearance, probably more than an old bit of cable stuck under it anyway. It's obviously a little longer than required as well, although anybody running an 18 or 19 inch narrow rear tyre it would be a nice rear guard. So it was time to introduce it to our good old friend Mr Makita, 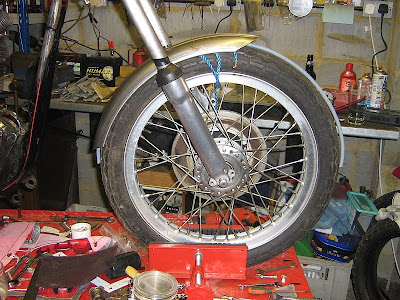 the guard was first cut square across and then the radiussed end of the off cut was used to mark the raw end and it was then shaped. At this shorter length and raised off of the tyre, the radius is beginning to look better.
Mounting brackets are not so straightforward as there is not enough room to get a 3mm thick bracket between the mudguard and the seal cover. Current thinking is to use the signature brackets, as utilised on the rear, and run them up behind the leg. 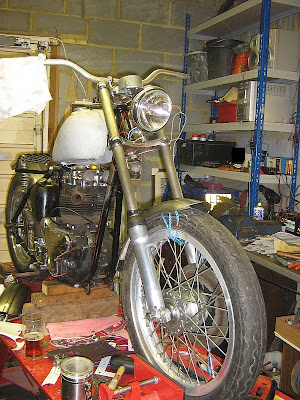 As I have already decided that the yokes and front hub will be done in Bitchin' Black, I am now wondering about the fork sliders. The stanchions will be hard chromed and ground over at Luton so there will probably be enough shininess going on at the front end, with those, the alloy rim and the stainless spokes making it look like a tart's handbag. Oh, and the headlight is going black with the rim dull nickel.

The rear number plate arrived yesterday, 'fraid I'm not prepared to show the registration world wide, there are some ne'er do wells out there ya know. Suffice to say it's pressed aluminium, 6" wide, 4 1/2" deep and a thing of beauty and wonderment. An idea is firmly in place for a bracket and hopefully that will get started in the coming week.
Brought to you by ... Quaffmeister at 11:46