A Crackin' Day Out

Spent yesterday over at Vintage Chop with Sumo, just kickin' back and shootin' shit like you do. I'd found a problem with the exhaust on the Enfield a couple of days ago, the rust that has been steadily growing on the silencer over the last couple of years had finally won the day.T here was now a fair sized hole appearing around the main mounting point. Time for some remedial work, Sumo said that he had an old fishtail silencer that might fit the bill. His initial thought were to cut off the fishtail and the up-swept portion and just use the centre section as a small "Cherry Bomb" type set up. However offering up the complete thing showed that it possessed a quirky charm about it, and so it was decided to fit it as is. This took a bit of TIG wizardry from Sumo, welding on the clamp section from the old silencer to make up the diameter slightly. It sounds nice, and seems to allow the motor to rev more freely, that might not be the case but it feels like it. 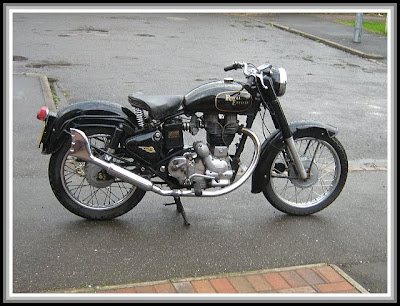 If you've visited Vintagechop.com you'll have seen that they stock the Biltwell range from the US, this is the first time I have been up close and personal with their kit and I must say it is very well made stuff.
So cheers, for the silencer, BBQ and a crackin' day out Sumo, you're a gent.
Brought to you by ... Quaffmeister at 19:35

Similar Stuff Out and About