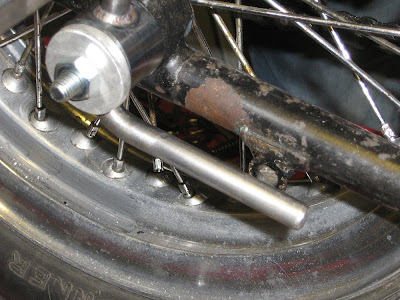 Got the number plate bracket back from the guy who tigged it up, nice job. Bit of a problem, in as much as in my rush to get it to him I didn't sort out the anti rotation fixing ! This lower bar will be shortened and a short tube welded on to pick up the original silencer mounting point. I don't really feel that it will be called into action as the surface area of the main anchor should give it a firm bite on the sidecar boss. But if life has taught me nothing else, it's that things will bite you in the arse when you least expect it, and the last thing I want, is the whole bracket loosening off and flipping 'round on the move. Not a major job to sort but still a job nevertheless. 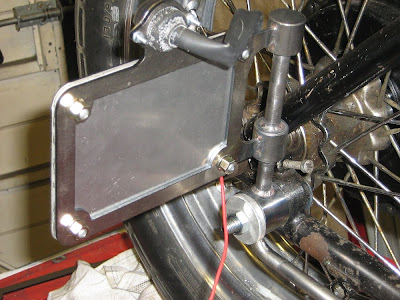 This rear view shows the neat job he made of the welding, once again underlining the need to become the proud owner of such technology. Still waiting for the rear light housing that will also fit through the sidecar boss, acting as a clamp to hold this number plate bracket on. The bracket will be dull nickel plated, and Scarlett from DB has got another of the aluminium backing plates to work her magic on. Should look pretty good when it's all done and together. 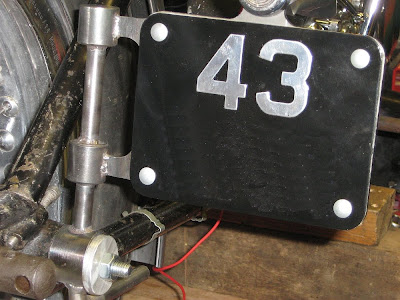 Here's a view from the front, or the back of the bike if ya like, the rear light as mentioned will sit below the plate. At the moment it has not been decided whether to mount it centrally to the plate or tucked in to the left. Guess it will be easier to decide when, and if, the completed unit is to hand and can be offered up. 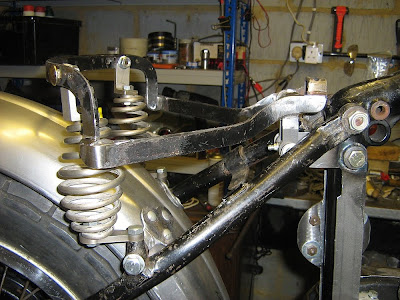 Here's the seat frame stripped of the mattress springs and the welds and corners cleaned up a little. It also shows the relocated pivot point about 30 mm behind the original position. The support brackets can be seen running down the seat post picking up on two existing BSA cross tubes that support the oil tank. Originally there were going to be two right angled brackets utilising the top oil tank fixing point and the hole that is visible in front of the main frame bolt, this set up looked somewhat incongruous as the angles when mounted did not match any other on the bike. 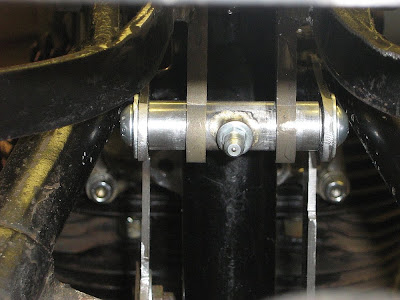 A straight on picture of the new pivot arrangement, hopefully the grease nipple will keep it all doing what it is supposed to in the pivotting department.
The seat will have new mattress springs fitted, supplied by Armours in Bournmouth. The original springs that came with the seat were bent when they came off and the hooks appeared very weak.
Brought to you by ... Quaffmeister at 17:36