It don't matter ya can't see it!

I hate that saying, of course it bloody matters. If nothin' else you know it's there and you know it's not right and that should be enough to make it better. If there's a part that's not as you want it, it will attract your eye every time you look over your work, it'll stick out like the proverbial Bulldog's bollocks.
It doesn't matter a damn what other people think, if you, yourself, are not happy with it. A thousand oohs and aahs from people going in and out of the local supermarket do not add up to one "that's nice" from someone who has been there and done it, preferably you!
As already mentioned in an earlier post, a bike is an object made up of objects, each object should be able to stand up to individual scrutiny. Whilst perfection is never attainable it should be constantly strived for, it's the point at which you say that'll do, or that's good enough that makes the difference.
Other members of the cognoscenti may not like the style in which you've built your bike, but that's personal taste, you can only hope they like the workmanship.
On my computer here I have Chicara's Number 3 bike as a screen saver, everyday whilst the old magic television is stokin up the coals gettin' ready to see what's going on in the world I study that bike, and everyday I see something else to look at, that is workmanship of the highest order. I wonder whether or not he's happy with it, somehow I doubt it. 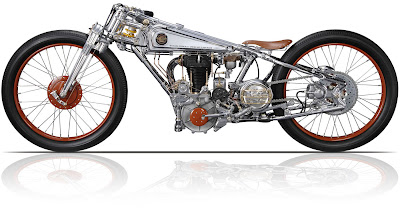 You've all seen it before, but no apologies for showing it again, the most beautiful motorcycle in the world. For now anyway !
Brought to you by ... Quaffmeister at 19:57

Similar Stuff Off to the side