Stirrings In The Shed

As hoped, there was a bit of movement on the A7 front today, got the seat spring support brackets welded on. This was done using a "jig" to ensure the spring centers remained the same as the frame mounting centers. 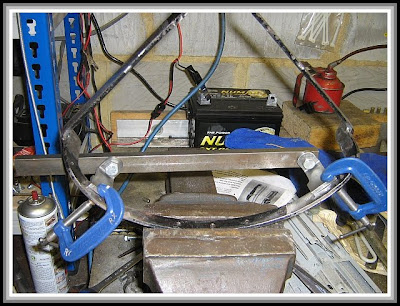 Because the back rail of the seat frame has got such a large curve, it was thought that simply measuring where the brackets should go, would surely end in tears. Therefore a piece of flat stock was drilled and tapped at 8 1/4" centers to match the pitch of the frame fixings, and the loose brackets bolted to that. This allowed the brackets to be swivelled to match the curve of the seat rail, but the hole centers remained fixed, and it worked a treat. As a bonus Cliff's MIG welder leaped into life first time, no need to threaten it or anything. 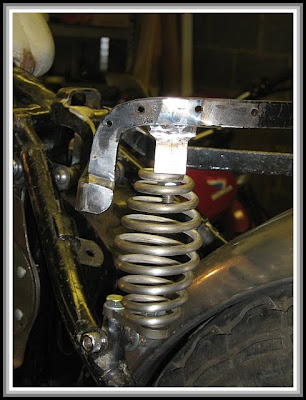 Here is one of the brackets on and the spring bolted up, Don't really know why this picture gives the impression that the spring is not fully vertical though, as it certainly appears to be in reality.

The support brackets were files and dressed after the machining done last week. As mentioned previously, the vertical section is basically there to stop rotation of the seat support arm, so a little judicious pruning of the width shouldn't be a problem. 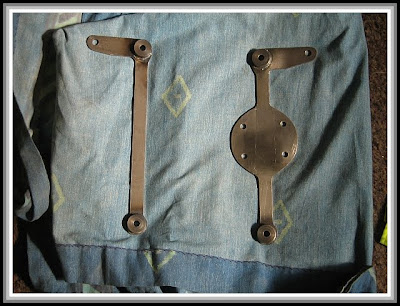 Here are the dressed brackets ready for fitting, another reason that the straight bracket on the left needed shaving, was to clear the lip around the back of the oil tank. The tank still picks up on the original fixing points on the seat post. The circular section on the other bracket holds the Ex-WD battery carrier, all will be revealed shortly. 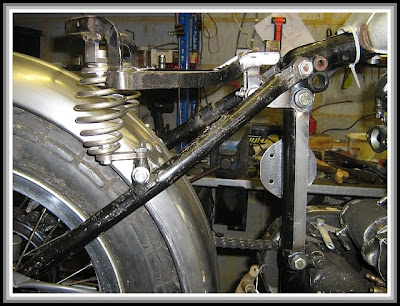 This shot shows the brackets sturdily doing their seat support duties, the use of the anti-rotation vertical arm is quite evident in this picture. The neat part of this set up though, is how the brackets virtually disappear when the oil tank and battery carrier are in place. 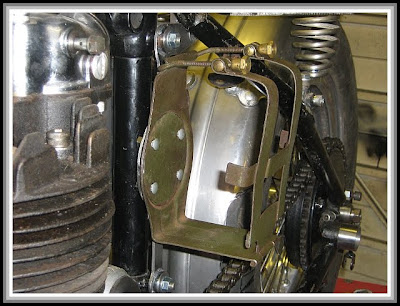 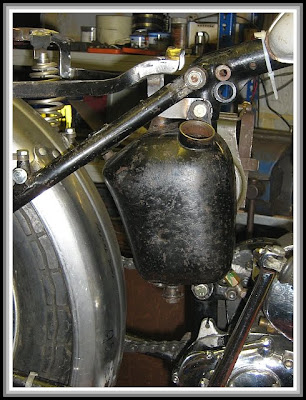 By the time these have been painted black, along with the frame, oil tank and the rear of the carrier, they should just blend in. The circle at the back of the battery carrier picks up the four bolts on a separate plate. The carrier itself is sandwiched between the plate and the support bracket. Slackening the bolts allows the complete carrier to be rotated. Quite why BSA engineered it like this is unknown, the only thing that comes to mind is that it is a standard fitment across a range of different frames.

Good headway was also made with the lower rear mudguard support brackets. No pictures as yet as they are still work in progress.

So as hoped it has been a good day.