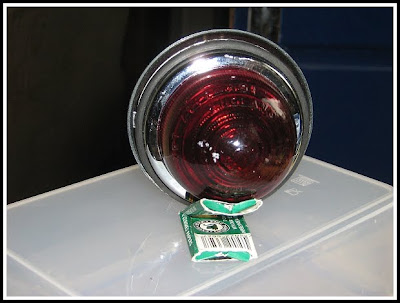 Following yesterday's hole of misery and bitchin' there was a little a brightness starting to creep in today.
For starters, and to give you some idea of my problems with the "custom" made housing, I weighed it today as promised, and, get ready for this, it goes 2.4 kg !!!! I shit you not, that's about 5 lbs for all you non metricated brothers out there. Now I know what you're thinking, how can a light housing weigh that much ? Well when it's virtually a solid block of steel it bloody well can. I'll get a picture of it just to show the sheer bulk and presence of it. 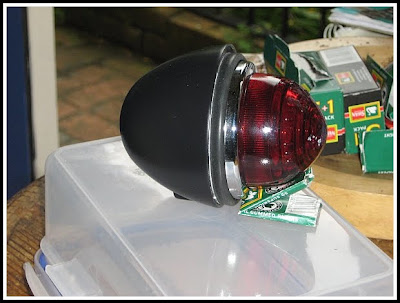 These pictures are the start of what might go on instead. The housing is a Sportster indicator shell, which is only just deep enough to contain the bulb holder. As you can imagine I ain't particularly happy with the step between the housing and the lamp unit. Fitting a turned ring of between 10 and 12mm between the two halves with a radius to marry and merge the two diameters is the thought at the moment. Should look OK in Bitchin' Black and not to obvious, just have to try it I guess.
Brought to you by ... Quaffmeister at 20:15