Dragged the spare set of cases out from under the bench earlier on. They are in better condition than I remember, with all the outer cases, barring the rocker boxes, in tact. They are numbered ZA7 which makes them 1949, as opposed to the existing motor, shown below, which is numbered YA7, a year earlier at '48. 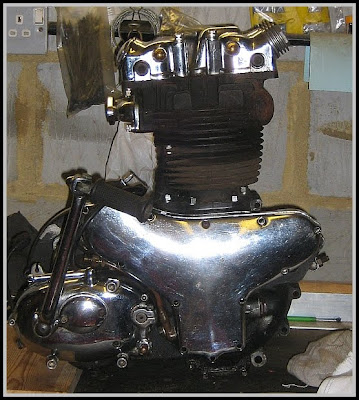 Back in the day when bling wasn't even a word to anybody other than Chinese Crosby fans, chrome was still king. The outer cases were originally chromed some thirty years ago, and all credit to the platers it is mostly still good. How things twist and turn with the passage of time, the cases will definitely not be chrome this time 'round. Strangely enough I don't really want to strip the old chrome off, no reason why really, only that it's lasted so well and it would be a shame to see it go.
The outer cases on the spare set are in very good and solid condition so it makes sense to polish these up instead. Which is fine for all but the timing cover, the photo below shows the spare cases with the famous piled arms logo on the side. In the top picture the earlier cover doesn't have this, and there in lays the rub. Because the engine is so early the rocker boxes are separate as on a Triumph, not a complete cover as seen on the majority of Beezer twins. This tends to confuse some people as it doesn't fit their preconceptions, although the timing cover shape is definitely of a BSA style. Using the earlier unbadged cover helps to support the mystery, so which way to go? 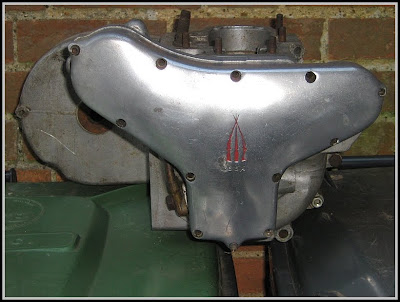