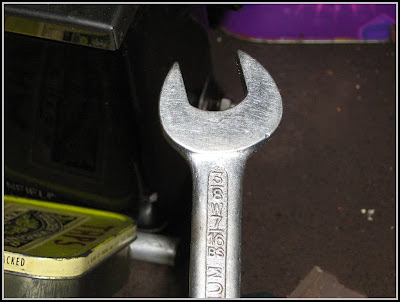 In a reply to a comment made by Grant the other day I quoted a spanner as 1/4" Whitworth, 5/16" Bolt Size, now I've been in and around engineering all my working life and these two sets of numbers are second nature to me. It struck me however, that this may not be the case for every body that may be lucky enough to be working on a pre-1972 British bike. I will, with a bit of help from Wikipedia, try to explain a little about English threads and spanners.
Joseph Whitworth created the World's first Standard in 1841, when he introduced the Whitworth thread form. Until then each manufacturer used a thread system that they devised themselves, so not even nuts and bolts were interchangeable let alone parts. Mr Whitworth specified a thread form with a 55 degree angle and a pitch that increases with bolt diameter, this is specified on a Thread Chart. The system was so successful that it was introduced as a British Standard and henceforth became known as British Standard Whitworth or BSW An example of the breakthrough created by the standardisation of fixings and parts is shown in this extract from Joseph Whitworth's obituary in The Times of January 1887.

The Crimean War began, and Sir Charles Napier demanded of the Admiralty 120 gunboats, each with engines of 60 horsepower, for the campaign of 1855 in the Baltic. There were just ninety days in which to meet this requisition, and, short as the time was, the building of the gunboats presented no difficulty. It was otherwise however with the engines, and the Admiralty were in despair. Suddenly, by a flash of the mechanical genius which was inherent in him, the late Mr John Penn solved the difficulty, and solved it quite easily. He had a pair of engines on hand of the exact size. He took them to pieces and he distributed the parts among the best machine shops in the country, telling each to make ninety sets exactly in all respects to the sample. The orders were executed with unfailing regularity, and he actually completed ninety sets of engines of 60 horsepower in ninety days – a feat which made the great Continental Powers stare with wonder, and which was possible only because the Whitworth standards of measurement and of accuracy and finish were by that time thoroughly recognised and established throughout the country.

At the turn of the last century this thread form was considered as a standard throughout the English speaking world. In the USA the standard was eventually changed when steel replaced iron as the material of choice for making fasteners. The Unified National Coarse series was introduced, although in Australia it remained at the forefront well into the 20th Century, until it was outmoded by the Metric system.
The British Standard Fine (BSF) thread has the same angle as the BSW, but has a finer thread pitch and smaller thread depth. The width across the flats and therefore the spanner sizes was common to the BSW series.
Whereas BSW, being a coarse thread is good for tapped holes in materials such as aluminium and cast iron, it is susceptible to loosening due to vibration when used in a "nut and bolt" configuration. BSF being a much finer thread and is far more vibration resistant, thus better suited for attaching, and keeping attached, parts to machinery such as motorcycles.
Because the BSF system employs a much finer thread it is easier to strip a bolt through over tightening. For this reason the hexagon of the head was always one size smaller than the equivalent bolt diameter in the Whitworth range.
During the Second World War as a way to save valuable steel, the size of the hexagon on BSW bolts and their nuts was reduced to the same size as that already employed for the BSF system.
This change was never rebuked following the end of hostilities and it is here where the confusion lies. Looking at the picture of the spanner at the top of the post reveals the two pieces of information, it is a 3/8" Whitworth spanner, but it fits a 7/16" Bolt Size fastener. This is the same throughout the range, a 1/4"W spanner will fit a 5/16" bolt, a 5/16" will fit 3/8" and so on.
To really add to the confusion, there seems to be no logic applied to the size of the hexagons across the flats, and there are no spanners from another standard that fit! Some come close but never that good close fit that leaves the bolt head or nut un marked.
A guide to the sizes of across the flats of the bolt heads used in common systems can be viewed here.
Brought to you by ... Quaffmeister at 13:43