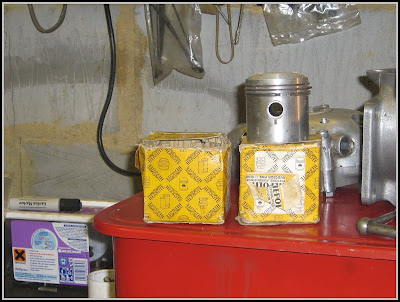 Tried to phone Chip yesterday, looking for the fabled Gudgeon Pins. After a couple of failed attempts, the penny dropped, 29th of January, Kempton Jumble, that's where he'll be then. Chip's the sort of bloke that may well have an odd pin or two at his disposal, a phone message and another call this morning revealed that there were indeed a pair to be had. Went 'round there and then it just got better, the pins were still in the pistons and the pistons, with the rings, were still in their boxes. Seemed a shame to remove the pins and break up the set, and when the crowns were read it said +0.020". Which is, coincidentally, what is written on the ones back at Ironworks HQ, the deal had to be done and was soon sorted.
Comparing them to the existing set show them to be at least a ratio higher compression, so a little more bang for the buck as well. Not sure whether SRM will still need the pins, as they are new and therefore the exact same diameter as a later A7 0.6875" so any new little can be honed to that, I would have thought. That remains to be seen tomorrow though.
Chip's main input to the cause is reconditioning Lucas Magnetos and Dynamos for both singles and twins, and sends them out in a fully restored condition. If you feel that your ride could do with better sparks or fitter Glow Worms in the front, he can be contacted on +44 (0)1462 623687.
Brought to you by ... Quaffmeister at 21:05