It's time to start the motor rebuild on the A7, from the floor of the cellar to the top of the chimney pot so to speak, everything must be checked, corrected and sorted. Anybody who is familiar with BSA's range of twins will be aware of the problems that can occur with the timing side bearing. Instead of a normal ball bearing as fitted on 650 Triumphs, BSA, in their infinite wisdom, persisted with a phosphor bronze bush. It is through this bush that the oil feed to the big ends must transfer, through the side of the bush and miraculously find its way into a spinning crank that may be doing 6000 RPM. It does work, but the importance of clean fresh oil, regularly changed, cannot be overstated using this system. There is a modification available from SRM, suitable for post 1952 twins, this motor is the early 1947 Long Stroke and there is not enough "meat" around the bush to take the machining necessary for the conversion. So it's a new bush, no other option available.
The new bush is pressed in during which the bore reduces, going tight, the bore is then resized to suit the diameter of the crank. BSA used to supply a tool so that it could be reamed to size using the drive side main bearing as a support and guide.
Nowadays the case half is clamped to a table and the bush is either jig bored or honed to size. Not a job for anybody with an electric drill that's for sure, I was lined up to get it done at Draganfly in Suffolk but the bloke decided enough was enough and retired at Christmas. After phoning about it looked like SRM in Wales was the best option, so it was going to be a 400 mile round trip on Saturday, early kick off as well because they shut at 2.
Looking on here Sunday, at front discs I came across this SITE.............

........... and thought that there must be a Stotfold in the States as well, as it is only a few villages away from her else. I fired her up and Lawks a' Lawdy it is Stotfold down the road!!! Only it's now in Biggleswade which is up the road as well, just the other way, never heard of 'em ever. Anyway, looking at the site and the bloke's Commando................. 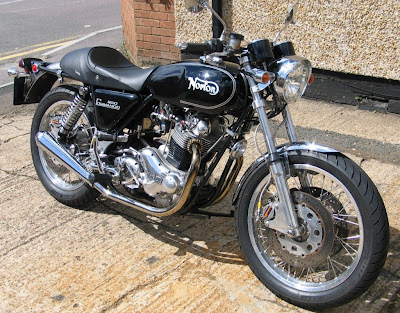 ........... I figured I best give him a ring on Monday.
What a result, after speaking to him for a while it was pretty obvious he knows what I'm talking about and keen to get on with it. I whipped in to see him on the way back from The Salt Mine in the evening, Terry, for he is the bloke, is into his bikes major league, small racing stuff is his bag, but other than that it's bikes, bikes , bikes other than bikes that is. Weird shit, never ever met him before, or heard of the works, which is full o' machinery. The addy is The Old Forge and it doesn't disappoint, pics to follow.
So the cases are going over there pronto and we'll see what the outcome is, but it's exciting times people!!!!!!!!!!
Brought to you by ... Quaffmeister at 06:44