Flat Out For Paint 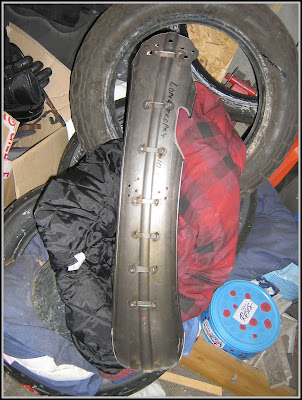 Had a word with The Armatoid about laying some colour on the tank and muddies over the weekend, bit touch and go as he has to uproot and move premises over the next couple of months. All cool though as he says he can do it, but time is of the essence so to speak. With that in mind the tins have pretty much been prepped, the straps were fitted beneath the rear guard to support the wiring, another 10 minute job that's been allowed to slide fo too long. He's gonna have the seat over there tonight to match the colour of the leather, so that will be "tied in" with the paint scheme.
As Steve Miller said, "Time keeps on slipping into the future", every day is becoming more and more precious.
Brought to you by ... Quaffmeister at 17:51

Similar Stuff Bobbin' along, Good People, The Way Back