Ben has just finished his sweet Thunderbolt over in New Zealand and has sent over a coupla tasters of the build,
A guy I know down Christchurch way had spent some years in the US and had imported container loads of bikes when he came back to NZ. I used to go to his place for parts for my other project and just wander around looking at all his machines, he had maybe 30 or 40, mostly unit triumphs, some beezas and triples. We’d talk bikes and Id listen to stories from his years of riding. I spied this dirty and dusty BSA sitting under the stairs. “Oh yeah, that one,” he said “We set that up for some guys who wanted to go flat track racing.” That’s as much of the history I got. An ex US west coast bike that may or may not have been racing. I offered some money for it and it was readily accepted, I guess my offer was too high! I eventually got it home and decided I would fix only the bits that needed fixing, just enough to get it going. But once I started on it, the urge to customize took over and before I new it was rebuilding the whole thing. I had made the mistake of trying to do both my triumph project and the BSA at the same time, so progress was slow, and my triumph is still only half done. Money was falling out of my wallet and into the BSA faster than what I had planned for, but the vision of the A65 was coming together. 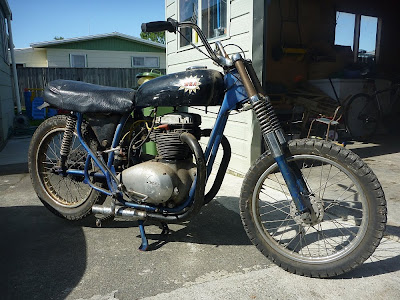 I checked the numbers and found it was 1965 Thunderbolt frame, but the engine numbers proved too cryptic to figure out the motor history. It could be an A50 bottom end with a 650 barrel, or a 650 with A50 numbers added for the ownership title. The tank and fork yokes I believe are Firebird items, the oil tank and all the other various parts from different years and different bikes. I tracked down some alloy rims and had them laced up to the QD hub in the rear and Honda hub in the front. I went with an XL350 front end originally because I thought it would be cheaper and more practical, but once I had some adapters machined to fit the forks to the yokes I didn’t save a cent over the cost of rebuilding the original beeza legs. I shortened the springs to get the height right, shaved and polished the Honda legs and I had a nice looking front end that actually works really well. Kawasaki shocks were fitted easily to the rear. 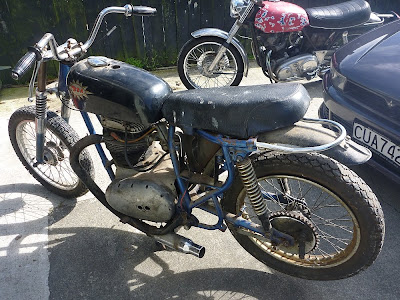 All the paint was done by me in 2k urethane, and I spent a good many hours prepping and making the tank and wassell type rear guard to look straight and clean. I originally thought the rear guard had some sort of speckled paint finish but then realised it was just paint over rust! That thing was more pitted than the devils driveway. I cut a seat pan from alloy sheet and had a local upholsterer make the seat to my design. New foot rubbers went on, new exhaust, oil lines, tyres and all new nuts, bolts and fasteners that were missing or had been lost on the garage floor during the disassembly and drinking phase. 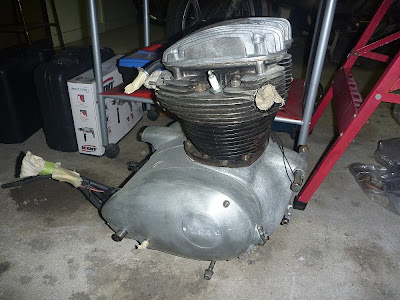 I fitted a pazon electronic ignition system and wired it to run battery-less, based on a wiring diagram for a points system with no battery. I didn’t know if it would work but it did! The black box and the regulator are squeezed in between the top of the oil tank and the underneath of the seat. A new Amal 928 with factory spec jetting was fitted. Clutch plates and rotor also replaced. A good few hours went into repairing and polishing the primary and timing side covers, they were in a real sh*# state. Final touches included using a Norton commando seat fastening nut for the steering damper knob. 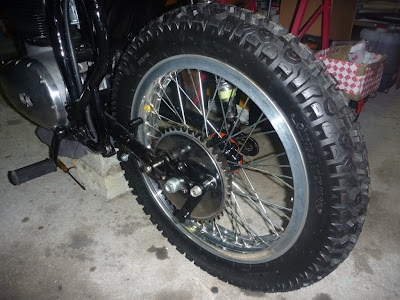 Nothing was done to the engine internals and as it turned out, it runs fine. A little puff of smoke on startup says the rings need doing at some stage, but it runs clear once its warm so Im in no hurry to do that. Its road geared, too tall for real off road riding, but should suit beach racing. I hope to make it to the Burt Munro Challenge again this year, and race on Oreti beach for the first time. For now though, I have to be content with short blasts up and down the road! 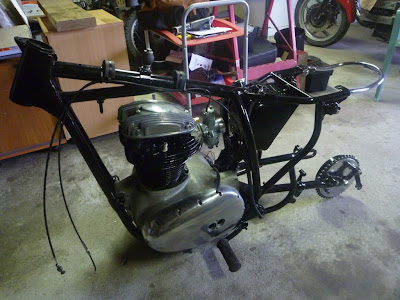 If the weather holds out Ben hopes to get some bike shots in, in the very near future, well worth the wait I promise ya!
Brought to you by ... Quaffmeister at 20:15