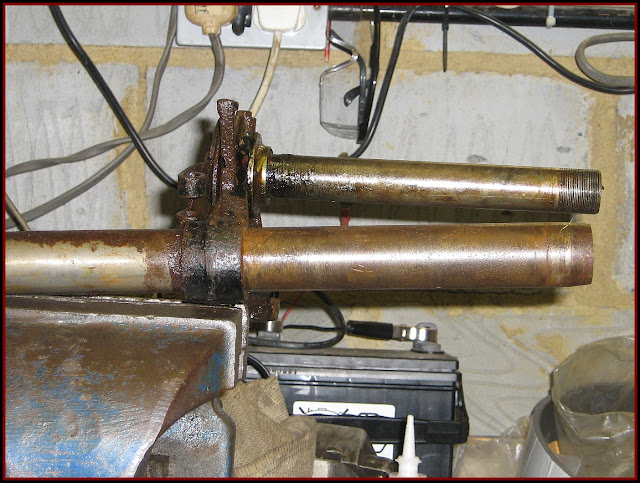 Johnny has just about got to the bottom of stripping out the '49 Speed Twin. There's always been a strong suspicion that this bike had a sidecar attached when it left Meriden in December 1949. This has been confirmed now the forks are out.
Back in the seventies these yokes were few and far between and highly desirable as they were made specifically for sidecar work and had (if my memory serves me well) 10 degrees of additional rake built in to reduce the trail of the front end, chopper heaven back then.
It does raise a couple of points though, firstly what a bastard if you scored the top yoke for this set up thinking it was standard and then couldn't figure out why the forks wouldn't go together using a solo bottom yoke. Secondly, we feel that the sheet metal components of the lower nacelle must be different as well to maintain the headlight on the horizontal, and compensate for the extra angle. If that is the case, then there can't be many kicking about nowadays and it's very doubtful they're being repopped.
Brought to you by ... Quaffmeister at 09:06