Following an earlier post pointing out the mortal dangers of getting too deep and intimate with Edward Turner's attempt at a rudimentary rear suspension system, it is still possible and indeed necessary to get so far into it without risking life and limb. 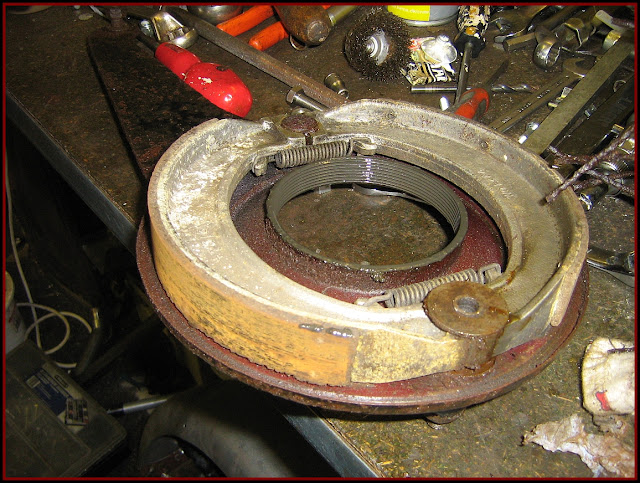 Getting the brake plate off was a bit of a puzzler, having the Triumph instructions on servicing a Mk. 2 Sprung Hub is not the best thing to have when you're stripping a Mk 1. No mention of the fact that the brake plate is actually screwed onto the center spring box, that's probably because it's not on the later improved version. More luck than judgement revealed the big thread in the middle as we were spinning the brake plate trying to figure what was holding it and realised the gap betwixt plate and drum was increasing. This is a lesson well learned as it's easy to imagine increasingly rare parts like this being destroyed by trying to lever the plate off in the assumption it was a normal floating set up. 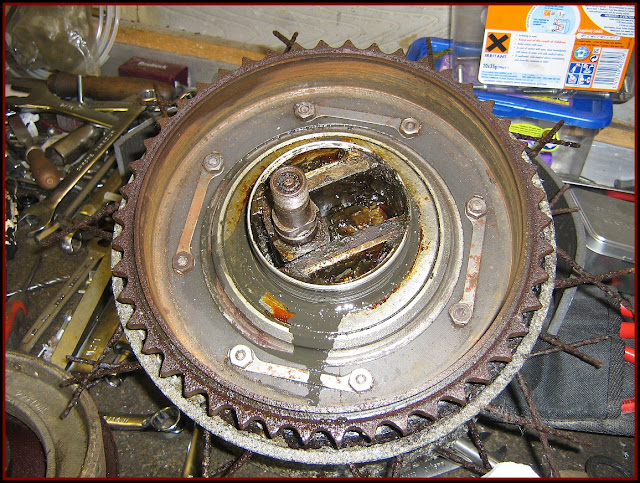 This is the state of play beneath the brake plate, this picture was taken immediately after removal with no clean up whatsoever! This bike has not been on the road for half a century and  probably exposed to the elements for a large proportion of that time, check out the state of the spokes. A testimony to the build quality and engineering that originally went into this old British iron, and the fact that it had luckily escaped that attentions of the spotty faced youths in the sixties and seventies. As can be seen the main spring box and associated parts are still packed with grease , preserving the internals and bearings, so there is nothing more than a new sprocket, brake shoes and a bit of a cosmetic uplift and it'll be good to go. A definite result as the bearings are something like £400 each nowadays!!!!!!
Brought to you by ... Quaffmeister at 08:30