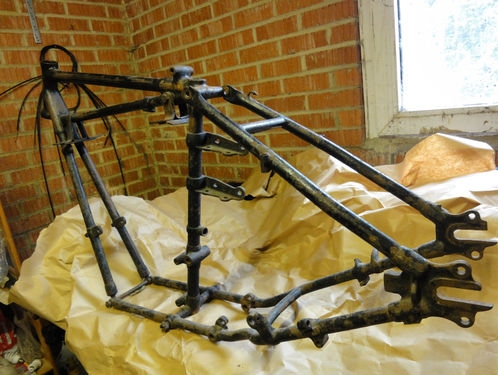 This has come up on the Bay of Fools, advertised as a Duplex Rigid frame, it's a lot rarer than that!  Although it shares a lot in common with the later single down tube frame, especially in the rear section the font half is somewhat different to say the least. 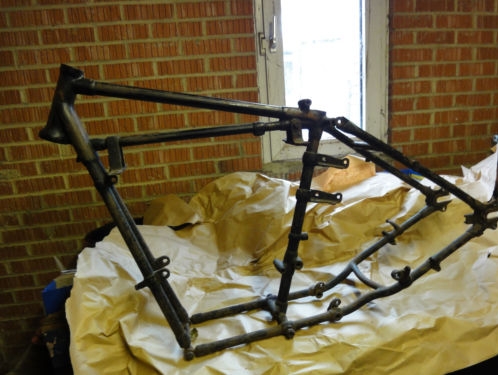 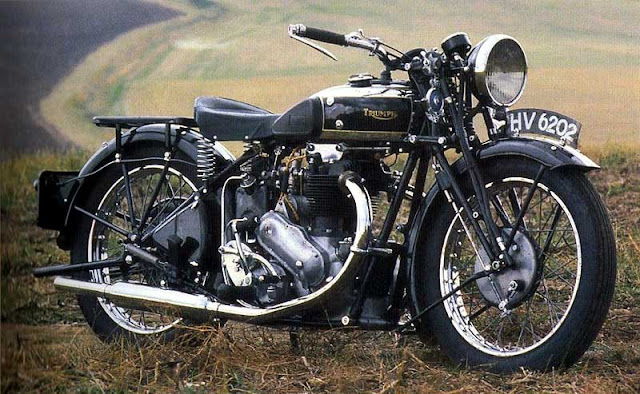 Lovely Bobber Ammo If You Have The Gojones!

There's not much on the web about these but here's the gist of what was found;

In July 1933 a brand new, modern Triumph made its bow in the shape of two prototype machines. This exciting machine, coded 6/1, was to enter limited production for the 1934 season but was only to be listed for two seasons. Not only did it have an advanced specification but it only sold in extremely small numbers, a few hundred only ever being built and today extremely rare. Designed by Val Page, the 647cc vertical twin cylinder engine bore no relationship to the Edward Turner Speed-Twin which debuted in 1937 and was subsequently mass produced in many guises and capacities. The 6/1’s valves are operated by a single gear driven camshaft mounted at the rear of the crankcases. The Mag-Dyno is gear driven from the camshaft with the dry sump lubrication featuring an oil container in the crankcase. A flywheel is carried on the nearside of the 360 degree crankshaft and, outboard of it, is the primary drive which is by double helical gears, an expensive feature and, because of this, the engine has to run backwards! To celebrate the arrival of the 6/1 an example was hitched to a sidecar and, after circling Brooklands for 500 miles at 60mph, was put through the gruelling ISDT winning the coveted Maudes Trophy.

If you want a real challenge, and have got the rest of your life to spare finding the rest of it, then it's HERE
Brought to you by ... Quaffmeister at 10:07

Similar Stuff Bobbers in a British style, Off to the side, Trick Trumpets, Triumph Bits Search