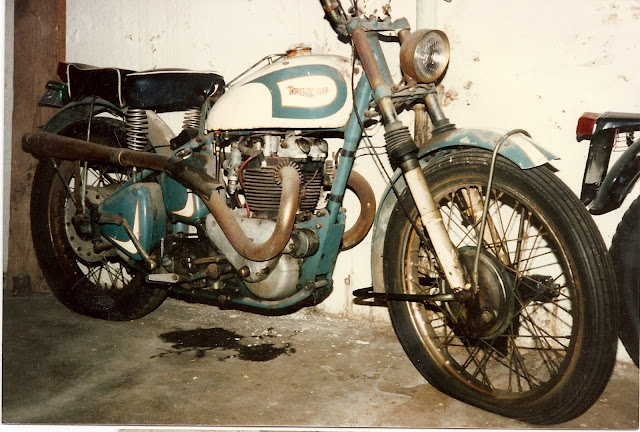 When Triumph introduced the 650 Trophy in 1956 it was called the Trophy- Bird, whether this was to cash in on the bikes that desert Racers had been putting together themselves while waiting for a 650 competition bike is unknown.
This is one of those bikes, an original conversion, shown here as bought by Bill in Oregon back in 1981. A 1950 6T Thunderbird motor fitted into a TR5 Trophy rigid frame.
The early TR5 frame is noticeably smaller and lighter than the normal 500/650 rigid frame, constructed of smaller diameter tubing without some of the cast lugs at the frame joints. Notice the front engine plate arrangement with the dynamo sitting through where the normal front down tube extends to meet the front horns of the rear section.
Sadly Bill sold the bike on to make way for other exotica and it was disassembled, with the new owner restoring back to a normal TR5 Trophy, which is also a highly desirable and rare Triumph in it's own right but it would have been nice for this snippet of history to have survived.
Brought to you by ... Quaffmeister at 19:12