Got a good rim, but broken spokes or a bad hub or vice-versa? Maybe your wheel looks fine, but your handlebars dance in your hands. there's something in here for you. Lacing and truing wire wheels is an ancient skill mankind developed shortly after evolving from apes, but few know how to do it today.

Re-lacing and truing is not extremely difficult, but is an exercise in patience and forethought. The payoff is in saving a ton of money. Under $100 from Buchanan Spokes will get you stainless steel spokes and nipples for almost any application. Polished stainless spokes are only slightly duller than chrome steel spokes. The benefit is that stainless spokes are stronger and less brittle than chrome spokes. In fact, the chroming process significantly embrittles spokes, making them prone to snapping. If you have rusty spoke wheels and want to paint them, you are probably running a risk trying to extend the life of a wheel that is already unsafe.

In addition to the spokes, whether they are a complete kit, or a couple of donors, you will also need a spoke wrench. The best style is the long thin single-size type, but the multi-size style is more common. The key here is that a regular wrench head doesn’t really fit in between the spokes. Spoke wrenches are thicker to engage the nipples over a wider area. The nipples are small, but require a lot of torque, so a regular wrench just won’t do. You will also need nipple grease. Just as I was considering asking my wife if she had any, I discovered that this was supplied with the spoke kit, thus avoiding embarrassment and potential injury.

For my example, I’m re-spoking my BSA motorcycle wheel, but the process is unchanged for other bike or even car wheels. In fact, car wheels are easier because there’s less interference between the spokes. For this BSA wheel, there is no way to replace an individual spoke. The whole wheel has to be undone. This was not the case for the rear wheel or my British car wheels, where I was able to replace broken spokes as needed.

Let’s get down to business. Start by taking photos! Once the wheel is apart, you’ll suddenly have a hard time remembering your spoke pattern. Next, make some marks on the hub and rim with a Sharpie to indicate the origin and destination for one example of each length of spoke. On most wheels, you’ll have spokes going two directions on each side.

I labeled all the holes for the spokes sweeping counterclockwise A, B, C, etc., and all the holes for clockwise sweeping spokes 1, 2, 3 and so on. The marks will save you heartache later. One aspect of wheels that is vitally important but gets little mention is offset or dish—how far in or out the hub is in relation to the rim. Before you disassemble your wheel, try to capture this dimension. Getting it wrong can result in fouling fenders or bump stops. 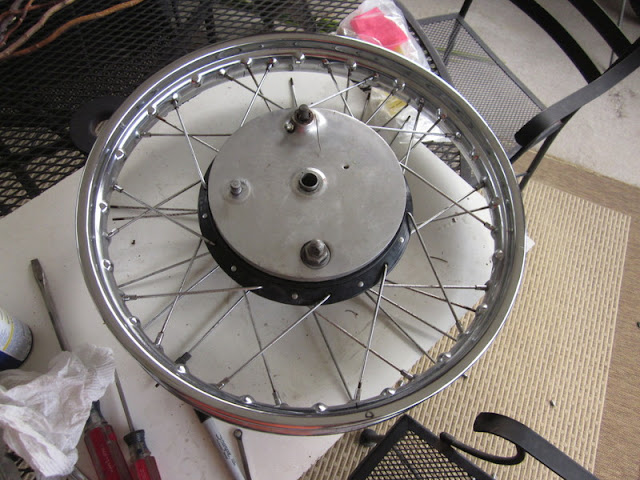 For a complete re-lacing job, break down the wheel until you are left with just the hub and rim. Even if you have the space between spokes, there really isn’t any point in doing a one at a time replacement because there is no way you will end up with a straight wheel anyway. Just break the whole thing down, it will save you time. If you are just replacing a couple of broken spokes, go ahead and do a one for one swap.

Set the rim aside. Set the hub in the middle of a clear working space. I found it helpful to elevate it on a coffee can. Orient the hub so that the longest spokes are on top. 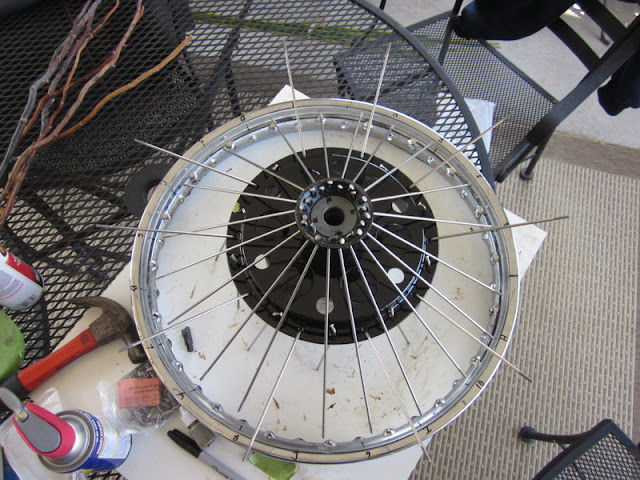 One spoke style at a time, feed the new spokes into the hubs. Repeat with the other spoke sizes. Before bringing over the rim, arrange the spokes to cross each other in your correct pattern. 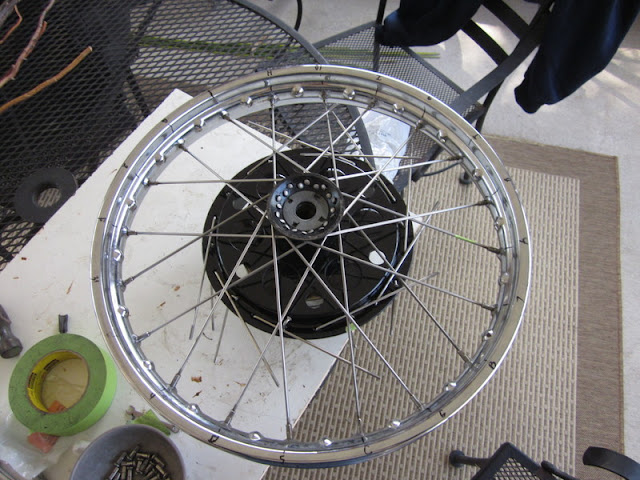 Now overlay the rim and feed the first sharpie-indexed spoke through the appropriate hole in the rim. 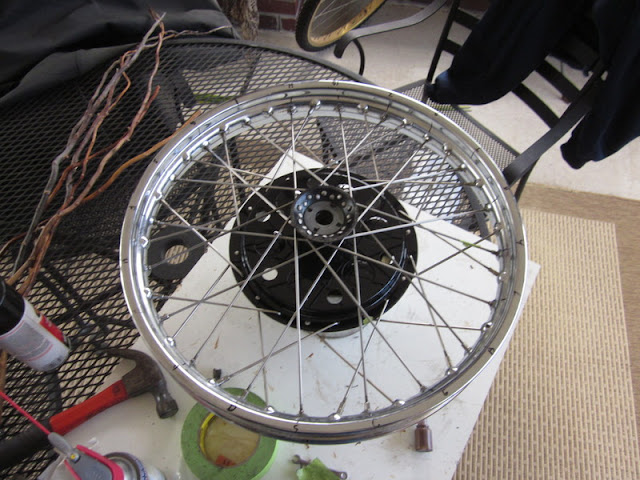 Apply a small amount of nipple grease to the threads and offer up a nipple from outside the rim. Thread the nipple on only about 3-4 turns. Alternate between the spoke styles until you have a nipple threaded onto every spoke on that side of the wheel. Go ahead and flip the wheel over and repeat for the other side.

Now the first tedious step begins. Tighten every spoke up one turn, working around the rim. Repeat until the spokes start to get tight. By working in this way, you’ll draw the spokes up tightly in a uniform manner that will hopefully result in the hub being close to center (radially correct) and straight (wobble or run-out). We will true the wheel statically on the bench, and then fine-true it on the vehicle or on a stand if you have one. Before truing, take a look at the offset (dish) and see if you got close. If not, uniformly tighten the inner or outer spokes (loosening the opposite) as needed to move the hub in or out.

We always true radially first as this is the hardest, and has the greatest impact on the ride. Measure from the edge of the rim to the edge of the hub front to back, and then measure left to right to see how close the hub is to the center of the rim. Orient the wheel so that the hub needs to move toward you. Loosen the spokes slightly on the opposite side of the wheel, loosening along an arc covering about 120 degrees on the far side of the wheel. Tighten an equal amount on the near side and re-measure. Repeat until you believe the hub is exactly centered.

Now, set the wheel up on its edge and roll it while looking at it straight on. Chances are one part of the hub will stick out more than any other. This area will need to be pulled back (or opposite areas will need to be brought forward). This part gets a bit brainy. Orient the wheel so that the area that sticks out too far is up. Where the hub is sticking too far out, the spokes that attach to the front of the hub at that point will need to be tightened while the spokes running to the rear of the hub in that area will need loosened. At the bottom of the wheel, do the opposite. Re-measure and repeat as needed. So you think your wheel is straight? Now it’s time to go find out just how wrong you are.

Mount the wheel to the vehicle, properly and safely supporting it off the ground. If you are lucky enough to have a bench-top axle stand, use that. The rest of us are going to be on the floor for a while. 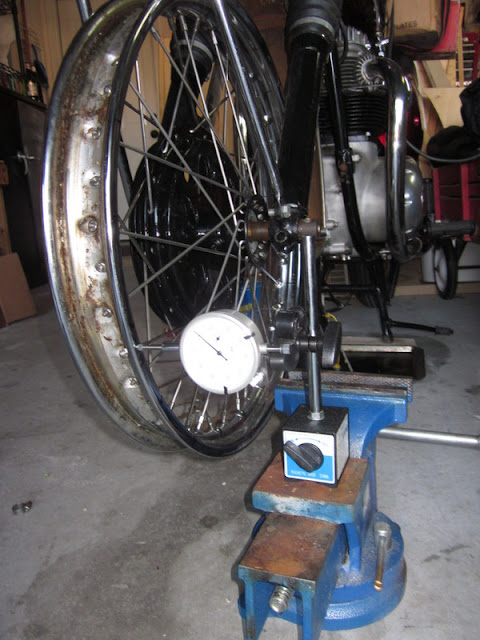 Break out that dial gauge and stand. Remember, we solve radial (out of round) problems first. Set up the dial gauge pressing against the front edge of the rim, adjusted to be mid-range in its travel so it can accommodate the wheel moving towards and away from the gauge. Spin the wheel and mark the high and low points. There may be more than one of each. Start adjusting just like you did on the bench. If the side to side wobble is too much for the dial gauge to stay aligned with the rim, go make some basic corrections for that and come back and complete radial truing. I read you should get the wheel to within 1/8th of an inch of perfection. That’s 125 thousandths and seems like quite a bit. You’re the one who has to ride on them. I stuck with it and got my wheel down to 25 thousandths—much thinner than a dime. Remember, your tire isn’t likely to be that round, so strike a balance you’re happy with.

Move the dial gauge around to run along the side of the rim. Work out wobble (run out) the same way as on the bench. Here’s the tolerance was given as 1/4 inch. Again, seems a bit much. I worked mine down to under 20 thousandths. You can visually see the difference in how smooth the wheel spins.

Now go twice around the wheel checking every spoke for looseness or extreme over tightness. Spoke should be fairly tight. Don’t crank them or they will snap. Now tap every spoke with a wrench. All spokes of the same length should have the same ring. A pitch higher than the rest indicates too tight. A dull sound is too loose. Re-check your radial and run-out to make sure you didn’t mess it up. 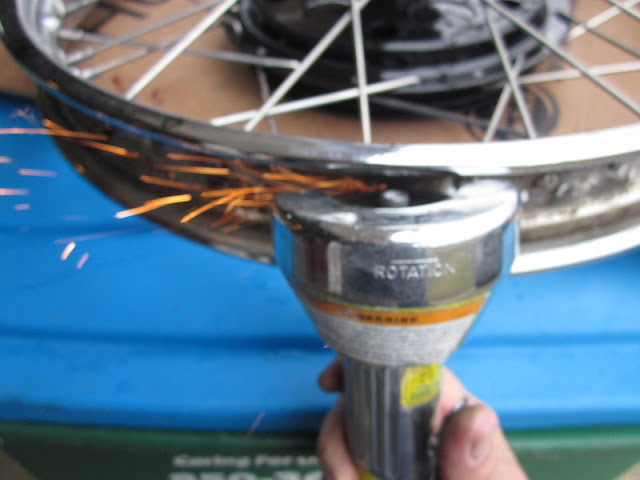 Finally, get out the grinder and remove any bits of spoke that protrude past the end of the nipples. Skip this step and you’ll have a flat tire in no time when the stray spoke punctures your tube. Congratulations, you’ve won.

Thanks to Marc for the text and pics